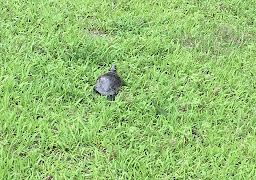 Every summer our family grows. Not with humans, but with animals. This year is no different. Aside from the four people living at our address, there are currently turtles, woodchucks (my husband's adorable nemesis), a family of four skunks, which we recently discovered living in our rock wall (also super cute if you don't get too close), many birds, and large clan of baby and adult rabbits. There are other animals around, of course, but these are the ones who we interact with daily. I'll often hear an animated conversation going on, only to find  my husband scolding orioles for taking hummingbird food or yelling at woodchucks for digging in the garden, and my daughter never passes by one of the baby bunnies without telling it that she loves it.

Yesterday afternoon, my husband had an argument with a turtle. Although I usually take the animals' side when he lectures them about eating his berries or messing up the mulch in the flowerbeds, I could see his point this time, since the turtle was clearly being reckless. When we first saw it, we were on our way to the grocery store, and it was headed towards the road at a pretty good speed. We stopped our car at the end of the driveway, got out, and attempted to explain the issue to the turtle and redirect it. It wasn't thrilled and made several attempts to get around us towards the road, but eventually let us herd it down the hill and away from danger.

An hour or so later, we cautiously turned into the driveway, and scanned the area and road for the turtle - smooshed or otherwise. I checked the road first, relieved to see that it had followed our advice and stayed safe. But just as I announced the all clear, my husband called out, "Nope! Look!" There was our turtle friend. Safe from the road, but sitting right in the middle of the driveway, on a curve, just daring a delivery driver (or minivan driver) to run it over.

So, once again we got out of the car. Once again, Mike tried to reason with it. If it is possible for turtles to roll their eyes, I'm pretty sure this one did. But, with what I assume was an annoyed sigh, it eventually let itself be herded once again - this time towards the stream where it belongs.

Email ThisBlogThis!Share to TwitterShare to FacebookShare to Pinterest
Labels: Slice of Life